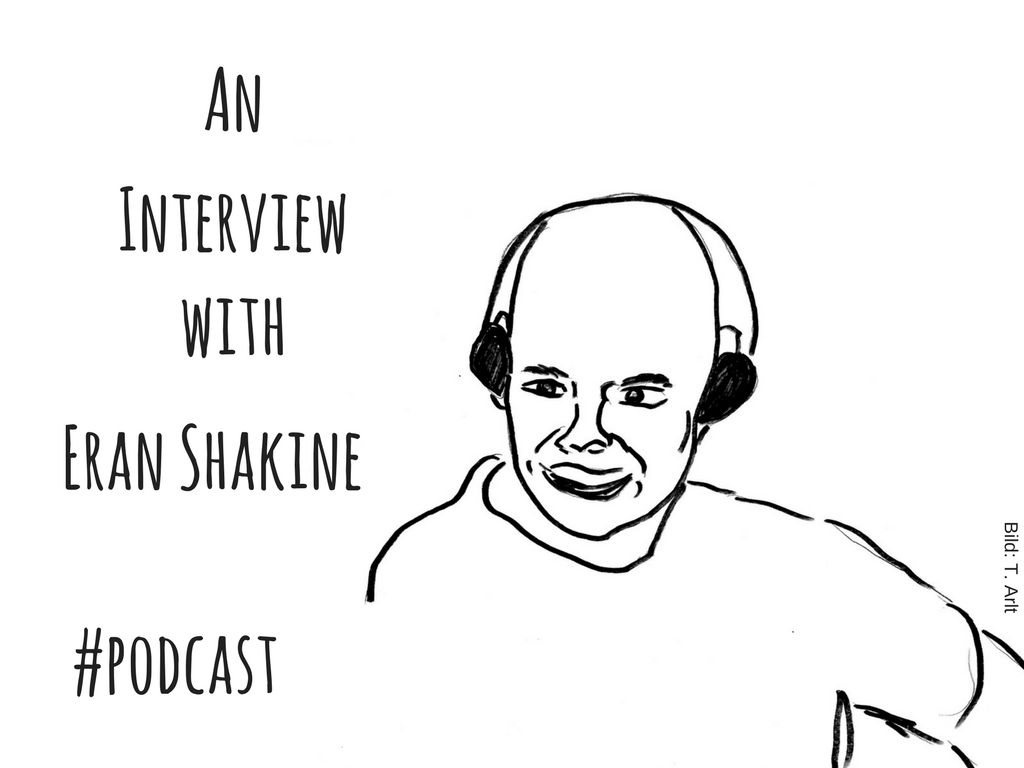 Last summer I’ve interviewed the artist Eran Shakine for my podcast Akustisches Plankton and we talk about his art, Tel Aviv (where he lives and works) and the role of religion in his art and of course his first solo show in Germany last year – A Muslim, a Christian and a Jew at the Jewish Museum Berlin.

I’ve seen your exhibition at the Jewish Museum Berlin in the end of February (2017). It was a great exhibition, your paintings and drawings inspired me.

Your trio of the three major world religions is impossible to differentiate in the series, they are cartoon-like (as inspiration for your work you’ve mentioned in an interview Hergé’s Tintin and Keith Haring). Also the exhibition title sounds like the beginning of a joke: Is this an advice to take religion not too seriously? For some people your humorous paintings and the subject of religion may seem contrary. But I was wondering – perhaps you think it’s a stereotype – , but is it possible that your Jewish cultural background is responsible for this kind of humorous approach or to take serious issues with humour?

It is like the beginning of a joke, you know with art we’re always trying to get people – there are so many images around us. We’re like embedded by images, so art has a tougher job now to try and stop people on their tracks, making stop and looking at the screen and look around them. We have to attract any way we can. I think cartoons or jokes it’s also something that people who are not interested in modern art they will understand and maybe it will make them think and stop and look at the art. It’s kind of a trap.

(…) They are some of my heroes. Hergés was for many years. I was sure that he is like kind of Michelangelo for me. Because my father is French and my grandfather was living in Paris and I was living in Tel Aviv and I’ve never met him for like many years till I was maybe I was thirteen or fourteen and for all my birthdays or when something special would happen I would get an envelope with Tintin or Asterix from my grandpa so it was a very special moment for me. 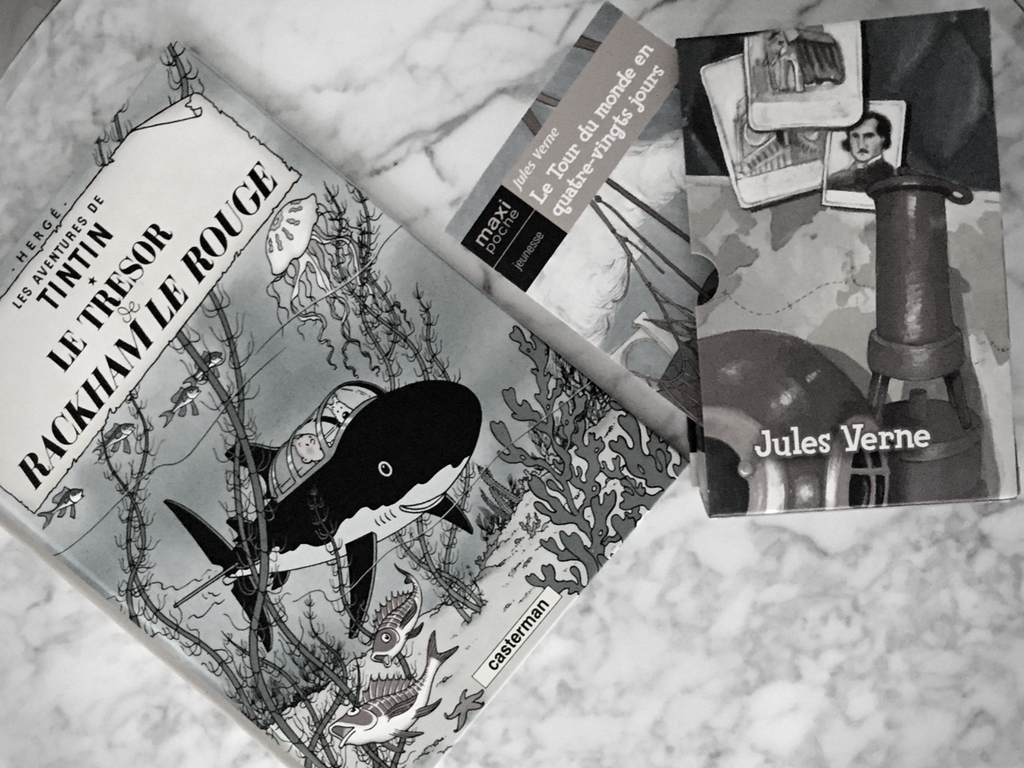 I’ve read in an interview that you don’t consider yourself as a religious person. Why
did you decide to work artistic on this religious subject? Was there a particular
occasion for this project?

I think my exhibition is not about religion, it’s more like social, it’s all my art works, they have different faces, but they are all dealing with social problems, I am not against religion and I am not trying to make people laugh about anyone especially religious people it’s just another way to approach. If you have a different approach and someone says I didn’t think about this or that way you know, so they start thinking and if they start thinking I did my job / it’s not that I am trying to get them to a certain title or certain idea. The idea is not to have an idea to be open.

(…) I have no problems with religions. I am not religious. We’re all just people, we are all the same. Deep inside we are all looking for happiness, so they found their happiness in a different way that we.

I am not sure, but sometimes I think people don’t see the difference between secular Jews or Muslims… and religious Jews or Muslims. Do you have a religious background? Do you would agree that there is a Jewish Identity without being religious?

I am not thinking about these things we’re all human you know. The religion is like a colour of your skin or it’s like the colour of your hair, for me it’s a part of this person. I am not thinking why is he blond or why is he black for me it’s he is black or he is blond fine let’s talk. That’s what you have in your mind, if you are nice person so you are a nice person if not you are not it doesn’t belong to religion.

I was born in the north of Tel Aviv but most of my life I lived in Jaffa which is a mixed city you have Muslims, Christians, you have Jews and they are all living in the same neighbourhood and the same buildings sometimes so this was part of my upbringing and even Tel Aviv space is small but I was kind of hurt when people in my school at the north of Tel Aviv will say something bad about Muslims you know because they just didn’t know because if they would know my friends they wouldn’t speak like that so this part of me where I’m coming from.

It was your first solo show in Germany, are there also plans for Israel? How were the reactions so far? What do you think, would there be a different feedback, if a German or European without being religious had been the artist of the exhibition?

I had lot of reactions from people from all over the world. Some of them were not so good and some good. For example there was a religious Jewish guy, (…) he felt offended that this exhibition was exhibited at the Jewish Museum in Berlin. He thought that it should be in a Muslim or Christian Museum as if I trying to say that the Jews are not accepting. I am trying to educate the Jews and he said it’s not us who should be educated it’s the others and that’s exactly what my exhibition is against it because there is no us and others we are all the same.

And the Muslim guy sent me text from the Koran you know like pages and pages I didn’t read it all there were all kind of reactions but a lot of e-mails and people getting evolved which is good you know and of course lot of good and supporting e-mails and people who were really moved and saying that they changed their point of view or changed their way of thinking about so I am very happy about the exhibition. I think it was a very amazing success.

During the exhibition there was a big program with workshops, artist talk, also a live painting …The exhibition started in October 2016 I am not sure but I think I remember lots of your paintings were also made in 2016? How do your paintings and drawings originate? Do you have ideas in mind, like a big boost of energy and it’s a kind of flow? Are you collecting your ideas in mind and after a while you are painting and painting…?

Sometimes I’m waking up at three o’clock in the morning and I have a vision or an image and sometimes it starts with the text. I have a text in my head and then the image comes but you know I have like a screen of ideas but I’m not getting out of my bed I’m still in bed and thinking you know and then I fall asleep again and in the morning the one the ideas that I remember I think oh maybe I should do this one. Some ideas I forget they are not the good ones. This is the screening process.

It seems religion doesn’t matter in our personal daily life although its political relevance is growing. On the other hand there are projects like the House of one in Berlin, where Christians and Muslims and Jews are engaged to create a kind of parish. They are planning to build a house of worship here – one that brings a synagogue, a church, and a mosque together under one roof.
Inspired by the idea of Martin Luther Kings Nobel Peace Price speech in 1964.
Where he said that the world is a large house in which we have to live all together no matter which kind of religious background.
The central idea is to create a peaceful trialogue between three religions without convincing and converting each other. Many may think of this idea as an Utopia. What do you think of the House of one? Are there similar projects in Israel? Christianity and Islam are rooted in Judaism. Should we pay more attention to our similarities?

I think it’s a good approach, sounds good. Star Trek is the utopia this is like you have the federation which is like the United Nation who control everyone and taking care of everyone but unfortunately our world is going to be more like Blade Runner. We are going more and more this direction and not that direction.

We are very far from Utopia, we have to learn how to deal with the place we are now not something that we wish to be in the future. We live in the present.

I did a project few years (maybe ten years ago) and I did also like a praying house but it was so small that only one person could going in so it’s like the opposite of what you were saying because I think when you are with your god you should be by your own and not with a group I tell you why I think the religions as themselves are all good it’s the people who start interpret the religion and start talking and trying to make a cult out of this religion they always missing the points and I think we all should made our own personal connection with God so my praying house was small so you can be only by yourself there but of course I am not against any approach. I would love to see next time I come to Berlin and talk to the people and see what they’re up to.

But you know that the exhibition from Berlin moved to Munich so in springtime I will have this exhibition in Munich [the Jewish Museum Munich – A Muslim, a Christian and a Jew. Eran Shakine from February 21 through October 21, 2018] and it will be a much larger exhibition.

And now we’re going to do three or four events in the world like this, in Signapore or in Hong Kong, in Berlin. So it’s going to be like a tour. Which is also very nice to connect people with live art and seeing the art in the making because then everyone can think I can do this or maybe I can do that as well which is good everyone should do art.

Thank you Eran Shakine for your time! It was a great experience for me! I wish you all the best for your current exhibition in Munich!

„A Muslim, a Christian and a Jew“ at the Jewish Museum Munich February 21 through October 21, 2018